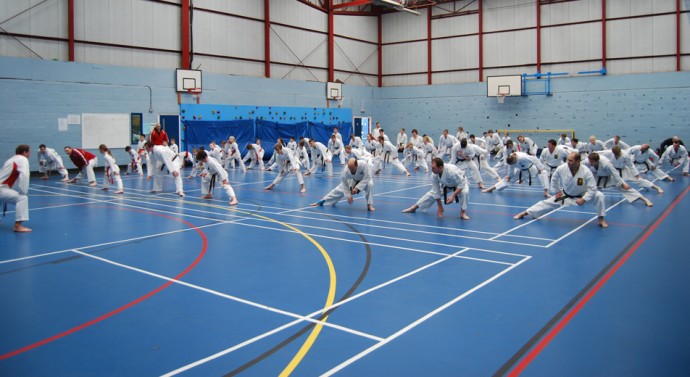 A nice fine day and some 85+ students attended this, the first of the free courses to be run by the WKU for its members.

Many senior instructors including our chief instructor Alan Flook, 7th Dan, and WKU chairman, Andy Gunton, 7th Dan, were on hand to organise the training session.

We started with a warming up session taken by Shaun Langson and then broke down into smaller groups each taken by a couple of the senior grades. The WKU are fortunate to have many ‘younger’ senior grades and it was a day for them to also start taking the reins, their comparative youth and experience brought an extra vigour to the session.

The squad coaches also took a session for all brown and black belts giving them the experience of their kumite knowledge, fitness and speed.

Two hours flew by and the session came to an end. We would like to thank all of our members for their support and the parents for giving up a rare fine Sunday afternoon to transport their children to the event.

Remember, the Bristol Summer Course on Saturday 5th July 2014 is also going to be free for all WKU members. This course has run now for over forty years, it is a day long course, held outdoors. Anyone nearing their time to grade for Dan grade or advancement should be there, younger members would not be expected to train the whole day, so perhaps for them a morning or afternoon session.