WKU Referee Ivor Thomas tweeted when he was en route to Amsterdam with Brian Jarvis & Matt Soames for the  Karate Premier League 1 (Dutch Open) in Rotterdam over Saturday and Sunday 19-20 March 2016.

For the Officials we had a 7am start and eventually got back to the hotel at 11pm on the Saturday and a 9-00am start Sunday with a 3pm finish.

I was used as a corner Judge in the Finals on the Saturday evening and Refereed / Judged various Bronze Medal Finals throughout Saturday and Sunday in Kata & Kumite. A very tiring but enjoyable week end however.

The main photo shows  WKU athletes Paul James and Ali Nyoni who competed in Rotterdam. WKU’s Ivor Thomas is in the back ground refereeing. 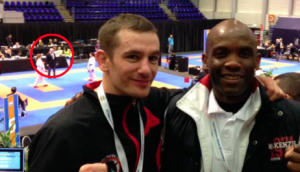 This image also from the competition.