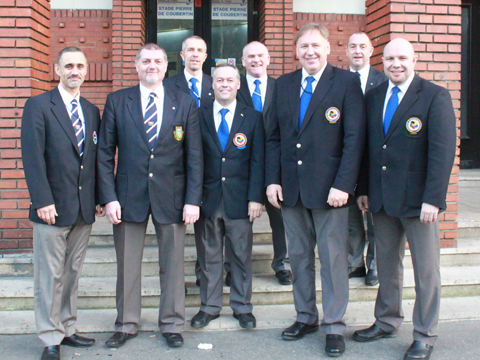 WKU Referee Ivor thomas attended the Paris Open on the 13th-15th January 2012 with seven other members of the English Karate Refereeing Delegation, pictured above.

This event took place at the at Stade Pierre de Coubertin in Paris, and was the first International Tournament using the new Kumite Rules which were passed in Malaysia at the Cadet & Junior World Karate Championships in October last year – so this was quite an experience for all.

Ivor reports from the championships:

Friday 13th January – Arrived at the Holiday Inn hotel at 10pm only to find that our rooms were double booked so we had to move to another hotel. Once we were settled in we headed out for a late evening meal.

Saturday 14th January – Start of the competition with 62 nations and nearly 800 competitors – it was going to be a long day.

The competition started at 9am with Male and Female Kata. I was used for 15 matches which included some repercharge finals and then onto the Kumite under the New Rules. Again I was used as a corner judge on many occasions including a semi final and a repercharge final. At 10.30pm the day was over and we went out for another late meal. As I said…a long day!

Sunday 15th January – 9am Start. This was Team Kata where I was used to judge the female semi-final. Then, continuing with Kumite where, once again, I was used as a corner judge. During the two days I was selected as the Match Supervisor (previously known as Kansa) on numerous occasions This role does now carry a lot more responsibility under the new rules with a lot more invovlement than before. 5pm saw the end of the Championships.

Overall the weekend was very rewarding (and tiring) with a vast amount of knowledge and experience gained on the new Kumite rules at such a high level which will be passed onto WKU officials, coaches and athletes. Dale Gamble, the EKF (English) Chief Referee informed me that due to the amount of Kata Judging done over the weekend and the fact that I was selected to judge at such a high level by World Officials, I would be promoted to EKF Kata Judge “B”.